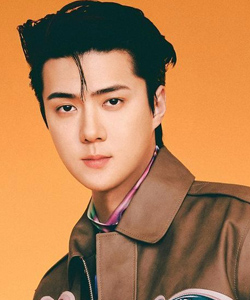 “LET US LIVE WHILE DOING THINGS WE LIKE” ~ OH SEHUN

DEBUT
Sehun was scouted by a casting agent on the streets when he was twelve, and was finally cast into S.M. Entertainment in 2008, after going through four auditions in two years. On January 10, 2012, he was introduced as the fifth member of Exo.

EXO
Sehun is the youngest (maknae) member of EXO. The group made their debut with the extended play Mama in April 2012. He is the lead dancer and lead rapper of the group. Their music incorporates genres like pop, hip-hop, and R&B, alongside electronic dance music genres like house, trap, and synth-pop. EXO releases and performs music in Korean, Mandarin, and Japanese. The band ranked as one of the top five most influential celebrities on the Forbes Korea Power Celebrity list each year from 2014 to 2018, and have been named “the biggest boy band in the world” and the “kings of K-pop” by media outlets.

On 2019, EXO-SC (Sehun and Chanyeol) debuted as second sub-unit of EXO with their first mini album What a Life. The two had previously collaborated for the single “We Young” for SM’s STATION X 0 in September 2018.

On July 2013, the duo released their First Album, 1 Billion Views with a total of 9 tracks.

FASHION
Sehun has been the face of different fashion brands such as Louis Vuitton, Zegna, Berlutti and more. On Ocotber 2020, he was announced as the face of Dior Men and was the first Man to be Dior’s Global Ambassador in December 2021 – present.

TV DRAMA AND FILM
Sehun made his drama series debut as Hwang Chi-Hyung in the series “Now, We Are Breaking Up”. Chi-Hyung is a new employee of the fashion company The One and the second son of the company’s CEO (Joo Jin-mo) and the brother of Hwang Chi-sook (Choi Hee-seo). The series run from November 14, 2021 – January 8, 2022 with 16 episodes.

He also made his big screen debut with The Pirates: Goblin Flag, the second installation of 2014 film, The Pirates. Sehun’s character, Han Goong, has a taciturn personality and exceptional skills with a bow and arrow. He appears suddenly at every crucial moment to protect the pirate crew and aid them on their journey to find treasure. Han Goong is a reliable figure who is more faithful to Hae Rang than anyone else.